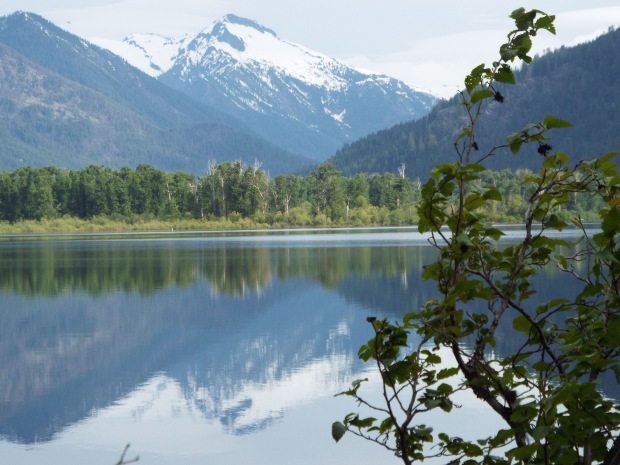 We went to Glacier View campground on Lake Wenatchee, about two hours east of Seattle, for Memorial Day weekend (and for my annual birthday trip). We have been to this campground before and really enjoyed it so we decided to pay it another visit, but this time we brought a lot more friends, eighteen friends to be exact. The sites are first come first serve, so you have to get there early enough to beat the long weekend rush. Luckily my husband and some of our other friends, who went up a day early, were able to snag three neighboring campsites on Thursday afternoon. Upon arrival, everything was set up, so I grabbed a beer and immediately immersed myself into camp life, turning off my phone and no longer worrying about the time. The views were spectacular from our site, so I found a little patch of sun on a log and took it all in. It was a fantastic weekend full of laughs, beauty and friends.

Some of my favorite things…shenanigans, friends, and a cold beer.

Since we are fairly seasoned campers, I thought I’d share a little about the food, especially since we tried some new things that worked out great.

Breakfast Burritos: You can make these ahead of time for the easiest, most delicious breakfast ever. (The genius behind these, Mel, used 6 eggs and it made 7 burritos.) Prepare the corn salsa; chop red onion, finely chop the cilantro, and mix in corn. Thaw and drain some frozen peppers, and be sure to get all of the moisture out using paper towels. She used about 1/2 the bag of frozen peppers. Shred 1 1/2 cups of pepper jack cheese. Barely scramble the eggs and season them to your liking. The eggs should be clumping together but still a little gooey. Combine the eggs, cheese, peppers, corn salsa, and some more fresh cilantro. For the carnivores in your group, you can add chicken sausage, or whatever meat that might strike their fancy. Now would also be a good time to add some hot sauce. Once you have everything you want, divide it up into the tortillas and roll them up. Wrap them in foil and store them in freezer bags until they are ready to make. You just need to throw them on to a camping stove, a grill, or the campfire. We made ours on a camping stove and it took about 15 minutes. I accidentally left one on for much longer, more like 30 minutes, and it was just fine. The tortilla was just a little crispier.

Breakfast Sandwiches: This is a tradition for our group, and they are a great way to start your day. You’ll need a pack of English muffins, eggs, cheese, and deli meat for the meat lovers. On the camping stove, make an to your liking. I always try teeter between over medium and over hard. While that’s cooking (and it’ll take a while on a camping stove, about 10-15 minutes), slice an English muffin in half and toast the inside first, just for a couple minutes, directly on the grill. Flip the English muffin over and  add some cheese so that can begin to melt. Put some of the deli meat directly on to the grill and allow it to get some grill marks. Once the deli meat is done, gently fold it over the top of the melted cheese. By now, your egg should be done, so add it to the sandwich, and there you have it a hearty breakfast for a day of hiking.

Thai Coconut Shrimp with Peppers : Mel used Thai noodle soup packets as a base (4 packets).  Genius! First, slice and saute 1 package of button mushrooms. Next, clean and de-vein your raw shrimp. Soak the noodles from the soup packets in hot water for 2 minutes and then drain. While those are soaking, chop some cilantro. You’ll need a can of coconut milk, and 1 can will be enough for 4 hobo packets. Shake well and stir it if needed. Lay out a sheet of foil and begin layering in items: noodles, spread them out a bit, a drizzle of coconut milk, a small amount of the seasoning packet, mushrooms, peppers (use the other 1/2 bag from the breakfast burritos!), cilantro, shrimp. For the shrimp be sure to only do a single layer so that they don’t overlap. Drizzle the shrimp with the oil packet from the soup mix, and add more of the seasoning packet. You’ll only need about half the packet. Bringing the long sides of the foil together, fold it over a few times, making it fairly flat. Then roll up the sides so everything is well contained.

Lemon Pepper Asparagus & Mushrooms:  I made this one up because I had the ingredients on hand. Using about a 1 1/2lbs of asparagus, 1/2 white onion, a container of mushrooms, and a cup of brown rice, will make four packets. (You can add chicken sausage for the carnivores in your group.) I cooked the brown rice, let it cool, then placed it in the center of the packet. I chopped the veggies, mixed them together in a large bowl, and then added them to the packet around the rice. For the seasoning, I added about 1 tbsp of butter (place it in the center, right on top of the rice), a generous helping of lemon pepper and a dash of sea salt. Bringing the long sides of the foil together, fold it over a few times, making it fairly flat. Then roll up the sides so everything is well contained.

With that said, how about some fun photos from the trip?

Another beautiful view from our campsite. 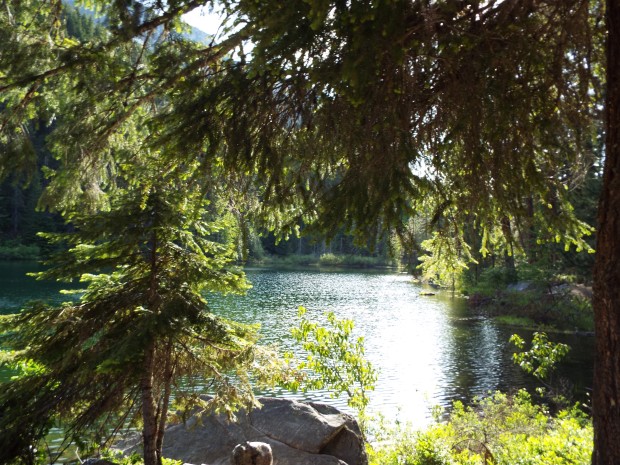 Meet Stihl and Bentley. They were enjoying the views too.

I know that camping isn’t for everyone, but there is something really amazing about it. We spent 5 days entertaining ourselves with conversation, playing games, hiking, and sitting around the campfire. How many people can say they do that nowadays? If you’ve never tried it, maybe give it a chance.

My name is Brittney. I am a wife and mother to beautiful twin boys. We have two dogs, live in the burbs and love our simple life.